July 11, 2017
Snapchat parent Snap Inc's stock (SNAP) is sliding after a downgrade from Morgan Stanley. The stock is set to close -9% on the day. 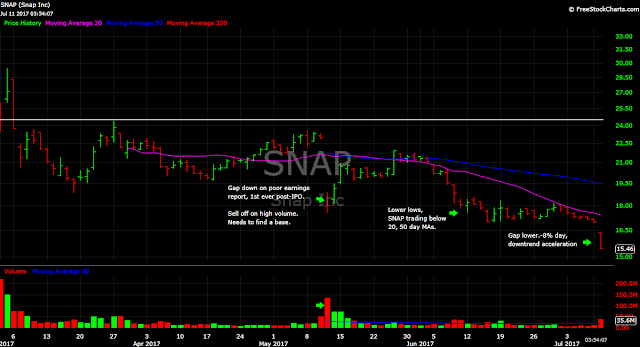 As the updated price chart shows (see annotations), SNAP has been suffering since its first quarterly earnings report back in May 2017.

Since then, the downtrend has accelerated. After a brief rebound above $21, SNAP has continued to trade at new lows. Today's gap down put the stock well below its IPO price of $17.

From Fortune: "Snapchat's Biggest Underwriter Says It Was 'Wrong' About SNAP Stock"


"...Morgan Stanley's downgrade is a particularly hard hit for the company as the bank was an underwriter for Snap's IPO, guiding the company through the process. Typically, such underwriters become cheerleaders of the company after it officially goes public, authoring "buy" or "hold" recommendations. And Morgan Stanley was no exception.


Following Snap's IPO, Morgan Stanley gave Snap (snap, -8.65%) the equivalent of a "buy" rating and a 12-month target price of $28—one of the most bullish on Wall Street at the time.


Never a good sign when your own underwriter throws you under the bus, after profiting on the deal...

Meanwhile, Facebook (FB) shares are trading just below their recent 52-week high and look poised to break out to new all-time highs. 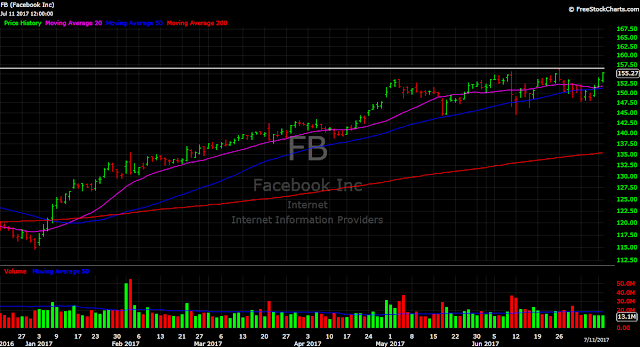 After slogging through a rough post-IPO year of its own back in 2012, FB rocketed higher in July 2013 after an impressive earnings report. Facebook shares have climbed steadily higher since then, outperforming the Nasdaq 100 (see chart below) and social media competitors such as TWTR and SNAP. 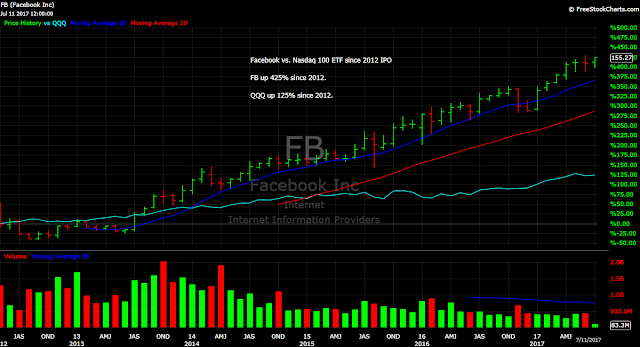