Sell in May and go away?

May 01, 2014
Sell in May and go away? Let's take a quick look at the figures behind this well-known market adage. Charting the market's seasonal returns below. 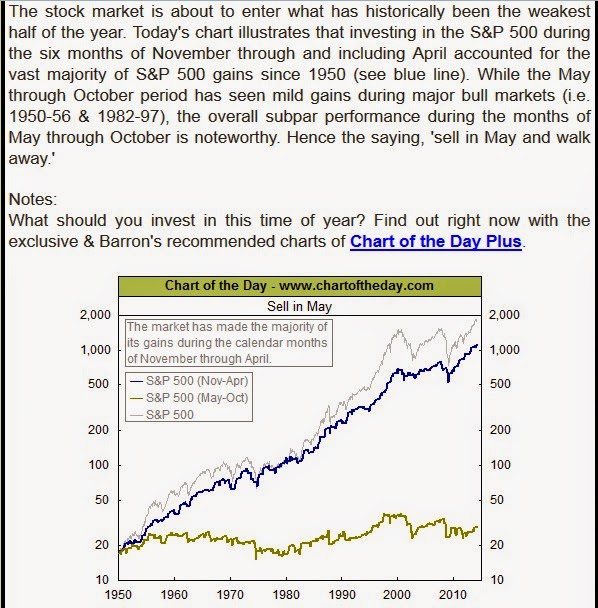 As you can see, the bulk of the market's gains since 1950 came during the "good period" of November through April. The seasonal period covered in the "sell in May" mantra is not nearly as strong. Returns in this summer period have been subpar, as Chart of the Day points out.

Since 2008, we find an even mix of upward moves and market corrections in this May - October period. The initial "sell in May" period shown here coincides with the selling panic of 2008. The bull market of 2009 - 2014 has been far more supportive of the seasonal pattern. However, the nasty correction of 2011 began with 8 consecutive down weeks in May - June.

We don't know what the 2014 May - October period holds, but we're not off to a very strong start given the recent divergence between the major indices and the weakness in growth and momentum stocks. Some traders have noted that recent upward moves in the Dow and S&P, weighted towards large cap names, are masking a breakdown in the broader market.

In Joe Fahmy's latest video update, he says the market needs time to digest its recent moves. Fahmy feels the market is healthy and supportive of long trades 2-3 times a year. When it's not as supportive, you lighten up your positions or go to cash and take a break.  You'll note that this is his last scheduled video until the fall, so at least one trader I follow is taking some time out for travel during this "sell in May" period.