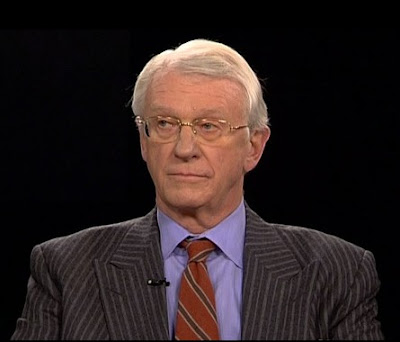 James Grant, John Hathaway, and Peter Munk sit down with Charlie Rose to discuss gold and the nature of our monetary system in this important roundtable discussion.

I was surprised and delighted to find that Grant and Co. would be Charlie's guests on Monday's program. The topic of discussion became even more newsworthy as the US dollar gold price hit a record high (in nominal terms) that same day.

But this is more than just a chat about a commodity hitting a new high. As you will see from James Grant's opening statements to Rose, gold is money and it has been for centuries. What we see in the rising gold price is a concurrent loss of faith in the viability of all paper currency systems worldwide.

This is the basic truth about gold and silver as real money and store of value that Rose and his audience need to hear.

Plus, John Hathaway, subject of one of our earliest posts, and James Grant provide some much needed counterbalance to the prevailing narrative of the 2007-2009 financial crisis and the Fed's ongoing money printing operations (aka "quantitative easing" & QE2). It's all here in this interview, one of the most important discussions I've heard at Charlie Rose's table.

3. The Gold Standard: an interview with Guilio Gallarotti - Finance Trends.

April 10, 2008
If you've been around markets for any length of time, you've probably heard of 20th century supertrader, Jesse Livermore . Today we're highlighting his rare 1940 work, How to Trade in Stocks (ebook, pdf). But first, a brief overview of Livermore's life and trading career (bio from Jesse Livermore's Wikipedia entry). "During his lifetime, Livermore gained and lost several multi-million dollar fortunes. Most notably, he was worth $3 million and $100 million after the 1907 and 1929 market crashes, respectively. He subsequently lost both fortunes. Apart from his success as a securities speculator, Livermore left traders a working philosophy for trading securities that emphasizes increasing the size of one's position as it goes in the right direction and cutting losses quickly. Ironically, Livermore sometimes did not follow his rules strictly. He claimed that lack of adherence to his own rules was the main reason for his losses after making his 1907 and
Read more