August 30, 2010
Last Friday, StockTwits announced they would partner with SecondMarket, an independent marketplace for private company stock and illiquid assets, to provide an expanded new commentary stream for discussion on private companies.

Some thoughts from Howard Lindzon on the new partnership:

"I love stocks and I LOVE investing in startups. About 8 months ago I started calling Facebook $fbook and Twitter $twit when I tweeted. I felt the IPO market was struggling and it would be cool if Private Companies had a lightweight exchange or center of conversation to point people too to learn about them in real-time. A place where employees and investors could get a pulse of what people were saying about private companies.

It would be cool for the Companies and REALLY COOL for STOCKTWITS is we could own all the company conversations on twitter. When I had the idea and Fred Wilson noticed me doing it, at least he thought so and his hunches are better than mine.

Through a partnership with SecondMarket, the marketplace for illiquid assets, we are excited to deliver to our community at StockTwits the capability to comment on an entire network of private companies..."

You can find the newly expanded private companies stream here, along with a database of ticker symbols that helps users find company info and profiles and allows them to tag their discussions on private firms for all to follow in real-time.

Here are some snapshots of the discussion stream and the private company symbols database: 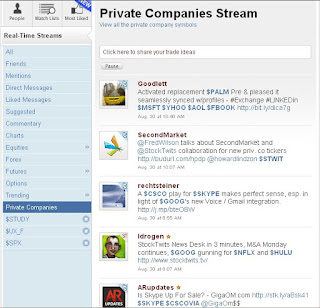 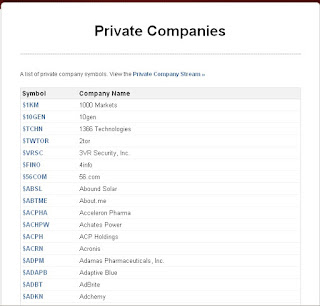 We (notably Howard and Fred Wilson) started out tagging private companies like Twitter ($TWIT) and Facebook ($FBOOK) with unique tickers on StockTwits earlier in the year as a way to include up & coming private businesses in our discussions on the stream. A few more proposed symbols were added for companies like Skype ($SKYPE) and Bloomberg ($BBERG), and we were well on our way.

The sudden expansion of this list from a handful of ticker symbols to a list of more than 200 companies is a surprising and exciting development. Furthermore, StockTwits will allow private companies to declare and manage their own ticker symbol. Seems like they are hip to the recent urging by Fred Wilson to open up the private company database to new firms, and this will likely help fuel the growth of this new database and the buzz around it.

So, in summary, now you know where to go when you want to chat about private companies in real-time. The StockTwits private company stream should prove to be an increasingly active venue for aggregating info and chatter on innovative, new businesses that have yet to IPO (or prefer to remain private in a post-SarbOx world). Should be fun. See you on the stream.