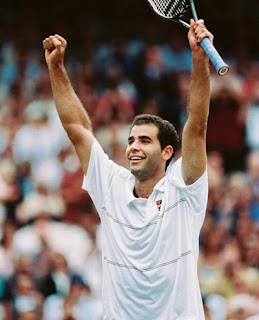 "In a career defined by victories, Pete Sampras learned his most valuable lesson in defeat.

At 19 years and 28 days, Sampras made a global splash by becoming the youngest men's champion of the U.S. Open in 1990.

For the next two years, he was ranked as high as sixth in the world. He was making a good living and was content with his career.

Then came the 1992 Open final. It was Sampras' first Grand Slam title match since his 1990 breakout. This time he lost to Stefan Edberg.

Sampras usually stayed even-keeled even after a defeat, but the way he lost ate away at him.

"You know as an athlete when you're fighting hard or not. All I did was just sort of play. I didn't dig deep. I didn't fight hard. I felt mentally I just sort of gave up," Sampras, 39, told IBD.

For the next few months, that loss stayed with him.

"It bothered me to the point where it was my 'ah-ha' moment," he said. "It just sort of woke me up to 'I do hate to lose.' From that point on, if I was going to lose a tennis match, it wasn't going to be because I gave up, but because I was outplayed or I didn't play well. It changed everything, that one loss..."

Check out the full piece and find out what Sampras was willing to do in order to harness his killer instinct and compete at the top levels of the game. I found some lessons here that could certainly apply to the arenas of trading, investing, or any endeavor where you are competing to reach your best "level of play".