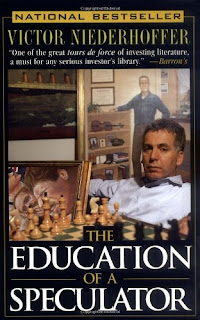 Slate's recent profile of writer/speculator, Vic Niederhoffer has been getting some attention from traders and finance types in recent days. I thought we'd take a look at it here too, to offer up some possible educational value from Vic's experiences with trading and loss.

Here's an excerpt from Slate's profile of Victor Niederhoffer:

"I've enjoyed getting your e-mails. It sounds like you've thought a lot about being wrong.

Well, the reason you contacted me, to call a spade a spade, is that I'm sort of infamous for having made a big, notorious, terrible error not once but twice in my market career.

Let's talk about those errors. The first was your investment in the Thai baht, which pretty much wiped you out when the Thai stock market crashed in 1997.

I made so many errors there it's pathetic. I made one of my favorite errors: "The mouse with one hole is quickly cornered." That is key. There are certain decisions you make in life that are irreversible, that lead you into a path you can't get out of, and unless you have more than one escape clause, the adversary can gang up on you and destroy you. What else? I didn't have a proper foundation. I was not sufficiently private in my activities. I was playing poker with men named Doc. I must've made a hundred errors on that one, but those are five or six that come to mind.

And then there's the greatest error of all, which is that I had delusions of grandeur. Unfortunately I was so successful for so many years in that particular field that I began to believe in my own success. I thought that because my method worked in markets that I knew about and had quantified, I could apply the same methods to something I didn't know about. And I had as an example [George] Soros, who would always say, "I made the most money in things I don't know about."..."

So, given that Vic's well-known blowouts as a trader served as a focal point for this interview on error and "being wrong", I still have to wonder if Vic really answered the question about why he failed as a trader. Yes, he offered up some reasons or what some might call alibis (brokers and floor traders circling like sharks, etc.), but did he really get at the root of the problem (that he touched on in comparing his squash game to his investing career), which, in his case, had more to do with leverage and taking on outsized risks?

Note that in addition to the discussion on error and losses, Vic also says some interesting things about his father, his mentor George Soros, taxpayer-funded bailouts, and life. Certainly a worthwhile read overall.