February 08, 2010
Apparently, the continued erosion of the US dollar's purchasing power and the ensuing inflation we've witnessed since 1975 has been merely an illusion.

"For all the concern over the $1.6 trillion U.S. budget deficit and record debt load, the dollar is as valuable now as 35 years ago. Measured against a basket of currencies from the Group of 10 nations proportioned by how they trade against each other, the greenback is up about 3 percent since 1975, according to Bloomberg Correlation-Weighted Currency Indexes.

That was four years after the Bretton Woods agreement, set up in 1944 to link currencies to the price of gold, collapsed. The U.K. pound has dropped 34 percent and the Canadian dollar has fallen 6 percent."

Using the Bloomberg Correlation-Weighted Currency Index as a value benchmark, the writer purports to show that the dollar is just "as valuable" now (more so!) as it was in the period just after Nixon "closed the gold window" and removed the last vestiges of the gold standard in 1971.

"The Bloomberg Correlation-Weighted Currency Indices (BCWI) provide an indication of the relative strength or weakness of one currency against the world, i.e., a representative basket of currencies."

The problem, of course, with assigning the dollar (or any fiat currency) a value based on the measure of a basket of currencies is that these currencies are all going down (gradually, over time) together. There is no consistent reference point for measuring true value.

This is how one editorialist, named Goldrunner, explained it:

"...We introduced how the Dollar Index can only be considered a fiat pricing scheme since it cannot reflect the value of the Dollar. Value can only be determined against a constant reference point- certainly not against a basket of items that are constantly changing."

This is particularly true during a time period when most currencies are being devalued like the time period we are now entering. This is because a group of currencies that are all falling in value, if priced against each other, will leave the currency falling the least looking as if it has risen. Down is then up."

You may be interested to see how the US dollar has fared against gold in recent years. 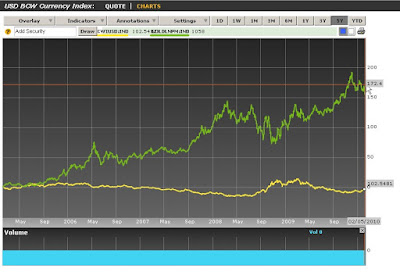 Chart courtesy of Bloomberg.com
While the index measurement shows the dollar to be holding steady (thanks to the "down is up" bias of said index) in the chart above, gold has still handily outperformed over a five year period. In fact, the precious metal, which started the period at a price of $411 an ounce has increased to over $1050 an ounce, a gain of over 150 percent.

Gold has increased over that period, not (as some would have you believe) because of a speculative "bubble", but because it's role as an international safe haven currency and a historical store of value (purchasing power) have been rediscovered by a new generation of investors.

There is far more to today's Bloomberg article than the dollar/gold relationship and confusion over the loss of our currency's purchasing power over time (see, for example Tim Geithner's eminently fadable opinion on the US government's AAA debt rating), but we'll have to address some of these themes in our next post (Update: see, "How far will Greece's problems spread?" for more on this).

In short, I've come to expect a bit more from Bloomberg than this. Hopefully, next time they will do their readers a real service by reporting the truth about our currency's gradual decline in purchasing power, sad as it may be. They might even look to their own data service & charts for help.