Who's going to bail out the FDIC?

Here's a chart from Mish's post which illustrates that decline: 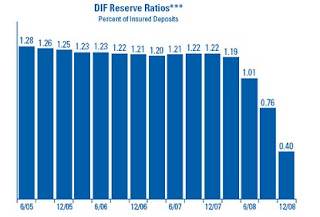 As outlined in the post above, this declining reserve ratio has (according to some) left the FDIC ill prepared to deal with the likely raft of upcoming bank failures. As you can see from the chart, the reserve ratio was at 0.40 percent as of December 31, 2008, down from an already low 1.01 percent level and below its legally mandated funding level of 1.15 percent.

And as Mish points out, these figures don't even take into account the FDIC's temporary boost in bank account coverage to $250,000. So, isn't that a bit of a problem, especially since more bank failures are expected throughout the year?

Well, not really, according to Bankrate.com. In an October 16, 2008 article entitled, "How the FDIC pays for bank failures" (which I just happened to be reading the other day while reading up on bank insurance), Bankrate's Laura Bruce explains that the money will just have to come from the US Treasury:

"...Christopher Whalen, co-founder and managing director at Institutional Risk Analytics, as well as a writer and former investment banker, says the FDIC will always be able to reimburse customers for their insured deposits.

"The FDIC is like any federal agency; the government runs on cash. Money comes in and money goes out and each of these little funds gets a piece of paper that says I owe you money plus accrued interest. But really, in most cases, it just evidences legal authority to spend money. In the case of the FDIC, it merely evidences funds paid in by the industry, minus losses. But it's still just a theoretical balance because it doesn't reflect at all the cash available to the agency to fund resolutions."

As long as the FDIC has a positive balance in the fund, the agency is just asking for the industry's money back. If that money is gone, the FDIC runs a tab at the Treasury because, by law, it has borrowing authority.

In the meantime, small banks are feeling the pinch from special assessment fees that the government wants to levy on them for the purpose of refilling the FDIC coffers. Note the irony: a large percentage of those funds were spent last year dealing with the failure of large banks like IndyMac.

Meanwhile, the FDIC collected no insurance premiums from most banks from 1996-2006.

Given all the recent information about the agency's precarious financial condtion, the question becomes: who will bail out the FDIC if it becomes insolvent?