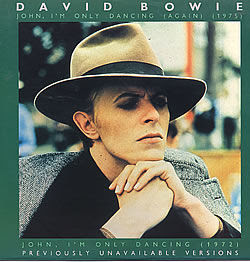 Following up on our recent post of David Bowie's 1974 appearance on the Dick Cavett show, here's a little added something from the same time period:

If you watch David's sit-down interview with Dick Cavett, you'll hear the two discussing the idea that "the lives of the rock stars are really not as strange as the lives of the fans".

Watching Cracked Actor, it's interesting to see this point bared out at a certain point in the documentary. As far as Bowie's mid-70's fanbase is concerned, there really seems to be some truth to this statement!
What exactly does this film document? Here's a quick summary from our YouTube host:
"In 1974, David Bowie embarked on an extensive tour of America. Performing over 70 concerts and taking 6 months, Bowie and his band stepped on stage each evening to deliver a highly tuned and finely timed performance that was the Diamond Dogs show. It included some of the most spectacular and expensive stage effects and scenery ever seen, even by today's standards.
In September of the same year, a BBC television film crew was invited to follow David Bowie mid-tour in and around Los Angeles during his week-long stay there, as part of the DIAMOND DOGS/PHILLY DOGS tour. This highly acclaimed 55-minute documentary film, entitled 'Cracked Actor' was first broadcast on 26th January 1975 as part of BBC-TV's Omnibus series."
Cracked Actor: Part one, part two, part three, part four, part five, part six.