While the current financial environment is dominated by a wave of bad news related to the credit crisis and weaker corporate profits in the tech and financial sectors, recent action in the leading Dow Jones averages may be painting a different picture for US shares: one of strength.

Dow Theory Letters writer Richard Russell has recently made repeated references to the surprising strength in both the Dow Jones Industrial Average and the Dow Transports since the time of their January lows.

While the DJIA has been something of a laggard between the two, the Industrials have remained stubbornly above their January lows (Edit: this is true only in terms of intraday lows reached on January 22, and not in terms of closing prices. My apologies.). 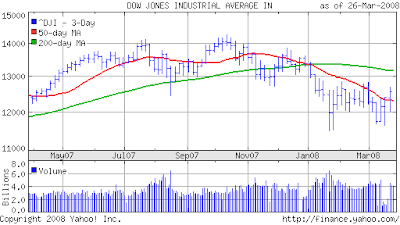 Meanwhile, the Dow Transports continue to move higher, having recently broken through the 200-day moving average on the daily chart, and above their old February highs. 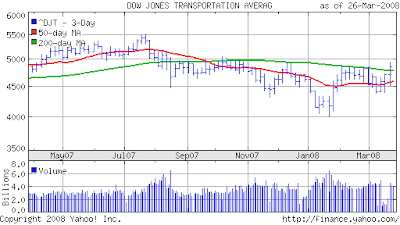 Are we witnessing a brief bear market rally in the leading Dow averages, or is this the start of something more?

As I noted in our January post, "Yeah, it's a bear market", Russell's reading of Dow Theory suggests that a primary trend bear market confirmation has been in place since November 21, 2007. So barring further notice (and a joint move by the Industrials and Transports to new highs), we remain, by Dow Theory standards, in bear market territory.

But the recent strength in the Transports and the Industrials has Russell wondering if stocks have seen their worst and are now discounting the gloomy news that continues to pour forth. As Russell noted in a recent letter to subscribers, "We have a bullish non-confirmation by the Transports and a rally on the part of both averages".

Since recording their January lows, the two averages have worked higher in the face of bad news. This curious strength in the face of overwhelming bad news leads Russell to wonder if maybe the stock market is signaling a light at the end of the tunnel?

It's an intriguing question, and one I will try and keep up with. You can subscribe to Russell's newsletter and do the same, or check out some periodic samplings of his work at 321gold.

For now, looking at that other well-known barometer of US stock market performance, the S&P 500 index (SPX), the overall picture remains bearish. 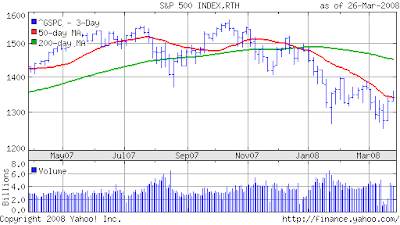 Since most professional money managers and investors use the S&P 500 to gauge US stock market performance, we'll continue to keep a close eye here as well and see whether it will follow the Dow Jones averages higher, or continue its move to the downside.