January 12, 2007
Thanks to Barry Ritholtz at the Big Picture for highlighting this story from the Wall St. Journal.

The world's financial system is overflowing with stocks, bonds and other financial assets -- $140 trillion worth, to be precise.

The figure was released in a study by McKinsey & Co. that maps financial assets around the globe and seeks to track the flows of these assets as they move from one region to another, putting hard numbers on the oceans of capital washing up around the globe.

At $140 trillion in 2005, the value of the world's financial assets hit a new peak and was more than three times as large as the total output of goods and services produced across the planet that year.

The study, released today, paints a picture of a world in which investors and the banks that manage their money are spreading their bets more broadly. Flows of investment across borders hit $6 trillion in 2005, McKinsey said, above levels reached at the height of the 1990s stock-market bubble and more than double the figure in 2002.

The article points out that the U.S. currently takes in 85 percent of all financial flows from countries that are net exporters of capital. And hey, there's a cool little graphic to illustrate this point as well. 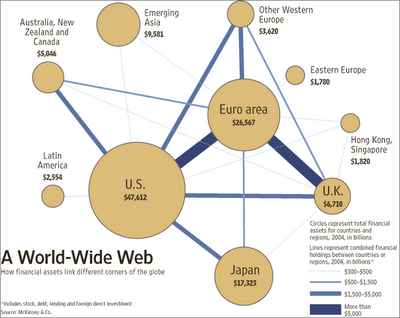 What will this chart look like ten years from now?

October 31, 2018
Welcome, readers. To get the first look at brand new posts (like the following piece) and to receive our exclusive email list updates, please subscribe to the Finance Trends Newsletter.

Having won their first Series in 86 years back in 2004, the last decade-plus has marked a very strong return to form for one of baseball's oldest big league clubs. So how did they do it?

Quick background: in late 2002, team owner and hedge fund manager,John W. Henry(with his partners)bought the Boston Red Sox and its historic Fenway Park for a reported sum of $695 million.

Henry and Co. quickly set out to find their ideal General Manager (GM) to help turn around their newly acquired, ailing ship.

This brings us to one of my favorite scenes from the 2011 film, Moneyball, in which John W. Henry (played by Arliss Howard) attempts to woo Oakland A's GM Billy Beane (Brad Pitt) over to Boston with an excellent job off…
Read more